Access to live music is ONLY available with a restaurant booking. Please note that bookings can ONLY be made by phone on 95511424 during normal business hours, and will require pre-payment of the ticket to confirm the booking.

THIS GIG HAS BEEN POSTPONED BECAUSE OF COVID ...FSM with Angus Burchall

Field, See & Mason with our extra special guest Angus Burchall on drums. It's a free event but it's also a fundraiser for the footy club so please buy a couple of raffle tickets.

$20.00 Tickets are available by calling 95511424 during business hours, or you can email info@arcobar.com.au for a callback 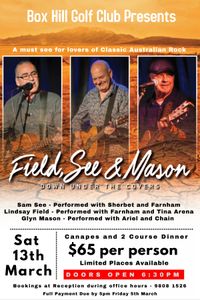 The Pardoners at BELGRAVE RSL Benefit $10

1 show. $25 pp Bookings must be made by phone 9551 1424 LIVE MUSIC IS BACK AT ARCOBAR! BOOKINGS AVAILABLE FROM 9AM THURSDAY 22/10 - Important Information - Bookings for dinner & live music events open from 9am Thursday 22nd October. Live music tickets will ONLY be available via phone booking, with 100% of the ticket price going directly to the artists. Phone bookings are available Monday to Friday 9am to 5pm on 95511424, or you can email us at info@arcobar.com.au for a call back at your preferred time during these hours. We will be respectfully asking for a minimum spend of $30 per person for dinner & drinks (on top of the ticket price). Most shows will have 2 sittings per night (6pm to 8pm & 8.15pm to 10.15pm), which is to comply with the 2 hour time limit rule. We have a maximum booking of 6 people per table. If you have an existing PRE-PAID ticket for a live music show, you will guaranteed a seat for the same artist.

Arcobar respects the health and safety of both staff & patrons equally - and strives to meet the highest standard of implementation of the hospitality industry COVIDsafe plan. Whilst we are VERY excited to be welcoming everyone back into our restaurant, we are also very aware of the huge responsibility we have as a venue to ensure we do provide the highest standards of a COVIDsafe environment, not only for our guests, but also for our team. As such, Arcobar has put into place some strict COVID control measures, which we ask everyone to respect as a condition of entry. This includes: • The collection of personal information (name, phone & email) • Temperature checks for indoor dining • A maximum stay time of two hours for all bookings • The requirement to remain seated • The requirement to wear a mask when not eating or drinking • Social Distancing for all table allocations • Hand Sanitation for all guests upon arrival Finally, whilst we are required to trade with significantly restricted patronage numbers, we respectfully ask for a minimum spend (including drinks) of $10 per person for breakfast, $20 per person for lunch, and $30 per person for dinner. arcobar | 8 arco lane | heatherton | 95511424 | www.arcobar.com.au

Details available as soon as Govt regs are confirmed

Details available as soon as it's all sorted with the Government regs..

The Pards are back on deck. $20 Bookings must be made by phone: 9551 1424 Please check this page for COvid details https://arcobar.com.au/event/live-music-is-back

Share
View on Google Maps
Field, See & Mason
It began at a dinner at Lindsay Field's to welcome Glyn back to Melbourne. Dinner and a bunch of wine was followed by a lengthy set of acoustic songs. Sam See and Glyn Mason decided to do a few live gigs together.
This dinner was in 1934, so something obviously clicked because the pair have been working as The Pardoners ever since and have released two albums of original material. More recently, Lindsay has joined forces with the Pards as Field, See and Mason.
On a long drive to a gig in the country, Sam suggested the trio rearrange Australian classic songs in the Field, See and Mason vein - Three voices blending over three guitars and, on stomp, His Left Foot
Last August, FSM recorded live in front of a studio audience and their new album Field, See & Mason ~ Down Under The Covers is the result...

Field, See & Mason Down Under The Covers: CD 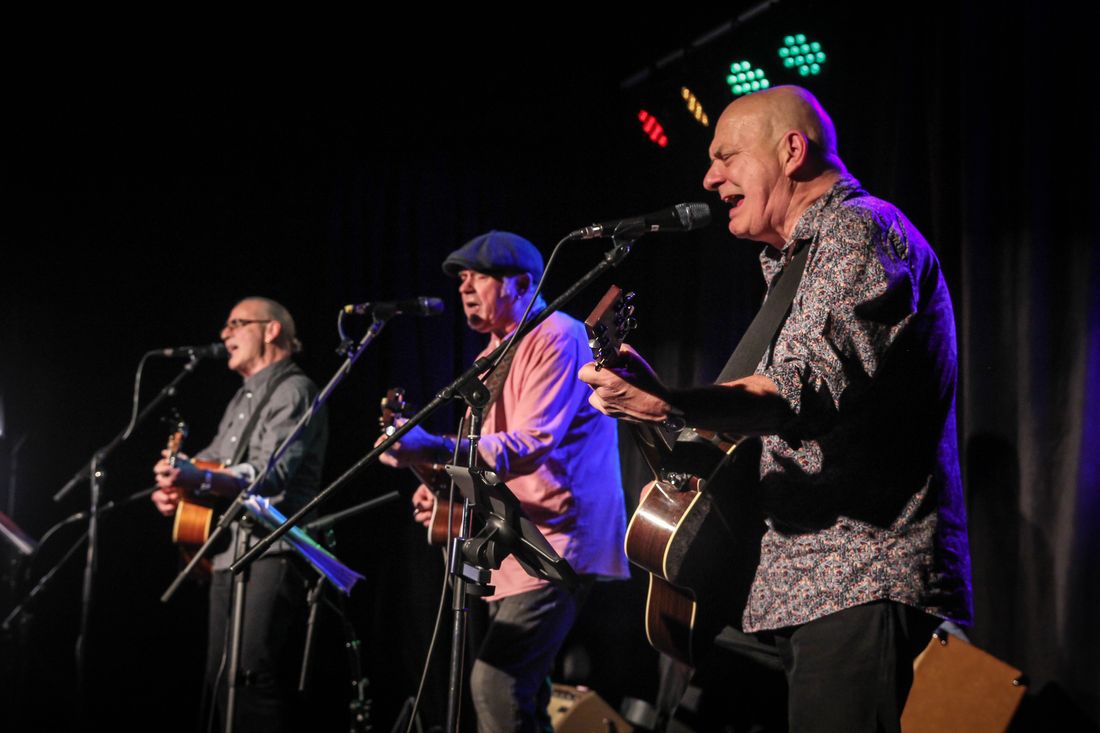